Bill Lair is a WW II Veteran and a very famous CIA Agent that worked in Thailand and Laos. In fact the CIA allowed him to be in the Thai Police as a Colonel.

I met this great man at his home today and we talked for about 2 hours. He told me that he started PARU, which is s a paramilitary police force. This unit is still in existence  and operational today.

PARU was responsible for training the Hmong people in Laos into SGU’s (Special Guerrilla Units). The Hmong SGU’s were brave men who fought against communism. 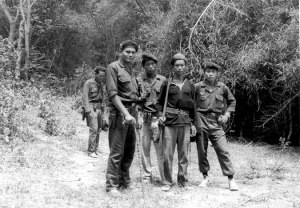 Bill Lair is an awesome person and so easy to get along with. He said he would never change anything he did, he loved his job at the CIA and loves the organization. He spent several decades in Asia and has many friends from that region of the world. He told me most of those have past on now.