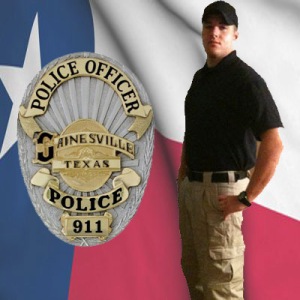 What a great honor for our youngest son to get hired on as a Rookie for the Gainesville PD. He just finished an Independent Police Academy and was sort of a Free Agent if you will.

He has worked hard to get through the Police Academy over the last few months. They went through getting pepper sprayed and getting shot with a tazer. Many hours were spent in the classroom learning the laws of the State of Texas. They also had some martial arts training and of course weapon qualification. I think of the nights he spent studying for the many written exams. It was great to go to his graduation and see him get his diploma.

We at Badges & Boots would like to wish him a long and prosperous career in Law Enforcement. The greatest thing the public can do to support our Law Enforcement Personnel is to pray for their safety, as well as wisdom in doing their job.